Find the sine of an angle using the sin calculator below. Start by entering the angle in degrees or radians.

How to Find the Sine of an Angle

In a right triangle, the sine of angle α, or sin(α), is the ratio between the angle’s opposite side and the hypotenuse. 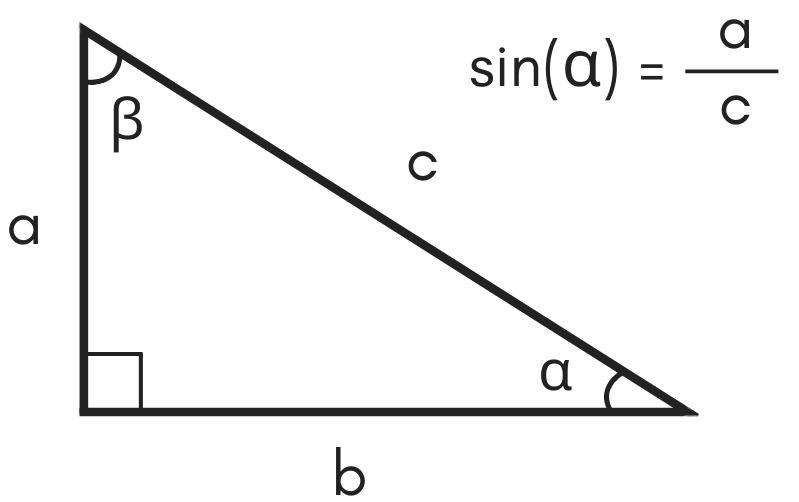 Sine is one of the three primary trigonometric functions and is abbreviated sin.

You might be asking how to find the sine of an angle? Use the formula below to calculate sin.

The sine formula is:

sin(α) = opposite a / hypotenuse c

Thus, the sine of angle α in a right triangle is equal to the opposite side’s length divided by the hypotenuse.

To solve sin, simply enter the length of the opposite and hypotenuse and solve.

For example, let’s calculate the sine of angle α in a triangle with the length of the opposite side equal to 4 and the hypotenuse equal to 6.

If you graph the sine function for every possible angle, it forms a repeating up/down curve. This is known as a sine wave.

The curve starts with an angle of 0, then increases to a value of 1 before decreasing to a value of -1, and continues indefinitely.

The graphic below helps to visualize how the sine curve is formed for each angle.

The table below shows common angles and the sin value for each of them.

The inverse of the sine function is the arcsin function. Thus, if you know the sin of an angle, you can use arcsin to find the angle.

Cosecant, on the other hand, is the reciprocal of the sine value. The following formulas show the relationship between sine and cosecant.