Use our percentage calculator to solve one of the problems below.

Select a Percentage Problem to Solve:

How to Calculate a Percentage

A percentage is the proportion of a partial amount to the whole amount and stands for “per 100.” It’s a ratio of one value to another that can be represented as a fraction over 100 or as a numerical value with a percent symbol (%). You may also see it denoted “pct” instead of the percent symbol.

Percentages are widely used beyond math class, for instance, to express or measure sales tax or discounts at the store, interest rates for loans, body fat, a tip at the restaurant, or the percent yield of a chemical reaction, just to name a few.

How to Calculate the Percentage Between Two Numbers

To start, let’s cover how to find the percentage between two numbers. For instance, you might want to find the number of correct answers on a test out of the total number of questions as a percentage to determine your grade.

To find a percentage between two numbers, use the following formula:

Thus, the percentage is equal to the partial value divided by the whole amount, times 100%. Don’t forget to add “%” to the result. 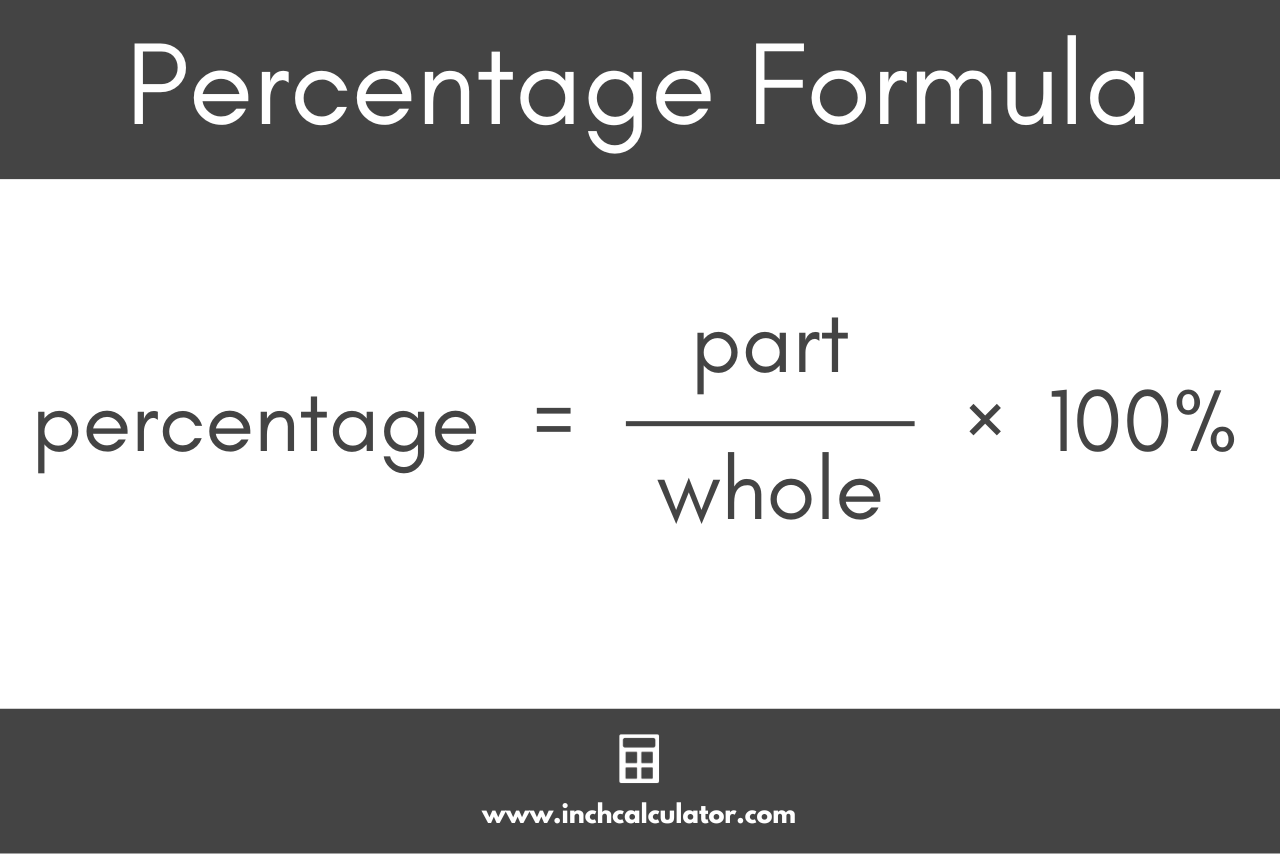 You can find the result of 25 out of 50 as a percentage by applying the formula above. The first value 25 is the partial amount and the second value 50 represents the whole.

How to Find the Percentage of a Number

In some cases, you might need to find the percentage of a number. Think of this as finding the partial value of the whole given only the percent of the whole.

By using algebra to rewrite the percentage formula above, it’s possible to solve any of the values if the other two are known. So, to find the percentage of the part to the whole, use the following formula:

The part y of the whole x is equal to the whole x times the percentage p, divided by 100.

How to Find a Change in Value as a Percentage

A change from one value to another is also often expressed as a percentage; this is known as percent change. For instance, when an item at the store is marked on sale, it may be advertised as the “percent off” of the original price.

You can find percent change using this formula:

How to Calculate a Percent Increase

Example: How to Find the Percent Increase Going From 20 to 25

For example, let’s find the percent increase in pay given a raise from $20 per hour to $25 per hour.

Using the change formula above, you can find that a raise from $20 per hour to $25 per hour is a 25% increase in pay. Not too shabby!

Occasionally, you may find the need to calculate the percentage of another percentage. For instance, let’s say you take a test that represents 10% of the grade in a class; if you score 80% on the test, how much does that one score contribute to your overall grade?

Percent of a Percent Formula

To find the percent of a percent, use the following formula:

How to Convert Percentages

In fact, you can also represent a percentage as a decimal or ratio as well.

How to Convert a Percent to a Decimal

As mentioned above, percent means “per 100,” so to convert it to a decimal, you can simply divide the percent by 100.

So, the percent to decimal conversion formula is:

The decimal value is equal to the percentage p divided by 100.

Example: Express 50% as a Decimal

How to Convert a Percent to a Fraction

Since a percentage is a measurement “per 100,” you can also express a percent as a fraction by placing it in fraction form over 100.

The fraction is equal to the percentage p over 100. After placing it over 100, you can then reduce the fraction to its simplest form.

Example: Express 50% as a Fraction

How to Convert a Percent to a Ratio

Since a percentage is really just a ratio of a partial value to the whole, you can also represent it in ratio form. To express a percent in ratio form, first convert it to fraction form, then simply replace the fraction bar with a colon (:).

Example: Express 50% as a Ratio