Convert a decimal to fraction form using the calculator below. The calculator shows all the work in the solution so you can see how to do the conversion step-by-step.

How to Convert a Decimal to a Fraction

Every decimal number can be converted to a fraction in just three easy steps.

Note that the process of converting a repeating decimal is different.

Step One: Create the Starting Fraction

The first step in transforming a decimal to a fraction is creating a starting fraction with the decimal as the top number and 1 as the bottom number. 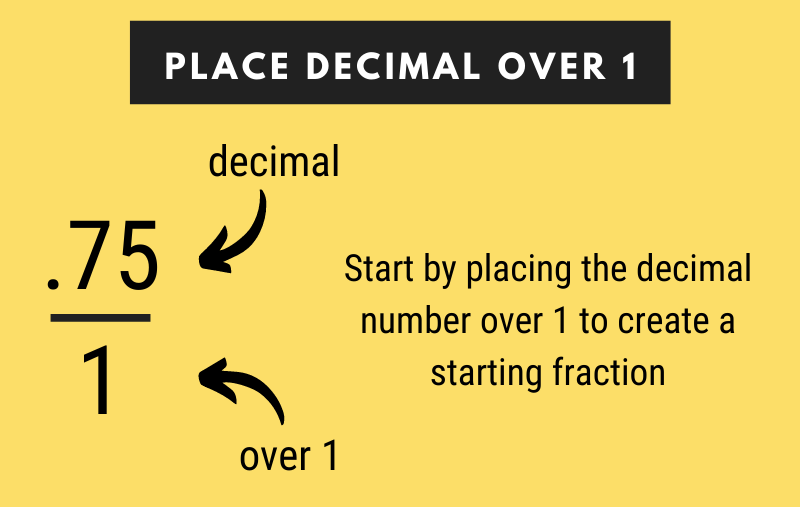 For example, to convert .75 to a fraction, start by making a fraction with .75 as the numerator and 1 as the denominator.

The next step is to multiply the numerator and the denominator by 10 to eliminate the decimal place. Continue multiplying both by 10 until the numerator is a whole number. 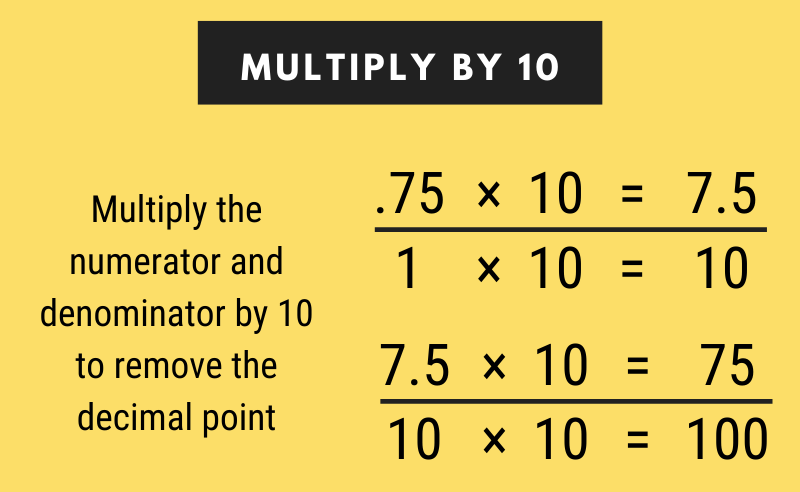 The final step in converting a decimal to a fraction is to reduce the fraction to its simplest form. To reduce, find the greatest common factor for the numerator and denominator.

To complete the example above, we know that the greatest common factor of 75 and 100 is 25. So, let’s divide the numerator and denominator by 25 to simplify the fraction.

Here’s a tip: use our fraction simplifier to easily reduce your fraction.

Decimal values larger than 1 result in a numerator that is larger than the denominator. These are called improper fractions, and they can be converted to a mixed number (also called mixed fractions).

To convert a decimal to a mixed number, divide the denominator by the numerator and set the resulting quotient as the whole number. Then use the remainder for the numerator in the mixed fraction.

For example, let’s simplify the improper fraction 5 / 4 to a mixed number.

You can also use a fraction to mixed fraction calculator for this step.

For negative numbers, remove the negative symbol from the starting decimal, then follow the steps above. After converting to fraction form, add the negative sign back.

How to Convert a Repeating Decimal to a Fraction

Step One: Create an Equation

The first step in transforming a repeating decimal is to create an algebraic equation to represent the decimal.

For example, let’s convert the decimal 1.178 into a fraction. Start by creating an equation to assign the expression 1.1787878 to x.

Step Two: Multiply by 10 Until the Repeating Decimal is on the Left

The second step is to continue multiplying both sides of the equation by 10 until the repeating number is on the left side of the decimal point.

If there are multiple repeating numbers that repeat in a pattern, then multiply by 10 until the repeating pattern is on the left side of the decimal point.

Continuing the example above, let’s multiply both sides of the equation by 10 until the repeating “78” part of the decimal is on the left side of the decimal point.


Step Three: Multiply by 10 Until the Repeating Decimal is on the Right

Building on our example, multiply both sides of the equation by 10 until the repeating “78” part of the decimal is on the right side of the decimal point.

The next step is to combine the equations and move both x variables to the left and both decimal values to the right.

Let’s combine the equations and solve.

Finally, solve for x to convert the decimal value to a fraction.

Let’s combine the equations and solve.

How to Convert a Negative Decimal to a Fraction

You can convert a negative decimal to a fraction too. Start by removing the minus sign from the beginning of the number.

Then, convert the number to fraction form following the steps above.

And finally, add the negative sign in front of the fraction to convey that this is a negative number. And that’s all there is to it.

An alternate method to convert a decimal to a fraction is to use a conversion chart such as this one. See the fraction equivalents for some common decimal values below. The table allows you to conveniently see the corresponding fraction for a decimal number.