Find the mean of a dataset by entering the numbers in the calculator below.

How to Find the Mean

The mean, or arithmetic mean, is the average value of a set of numbers. Thus, mean and average are the same thing.

The mean and average are one way to express the middle of a collection of numbers. More specifically, the mean is a measure of the central tendency of the group of numbers.

The mean for a sample is denoted x̄ (pronounced x-bar), and the population mean is denoted μ (Greek letter mu). It is one of the fundamental observations of data used in summary statistics.

You can find the mean using the following formula:[1]

Where:
xi = each number in the set
n = total number of values in the set

Thus, the mean x̄ is equal to the sum of all the numbers in the dataset divided by the count of the numbers n.

The formula to find the mean is equivalent to the following: 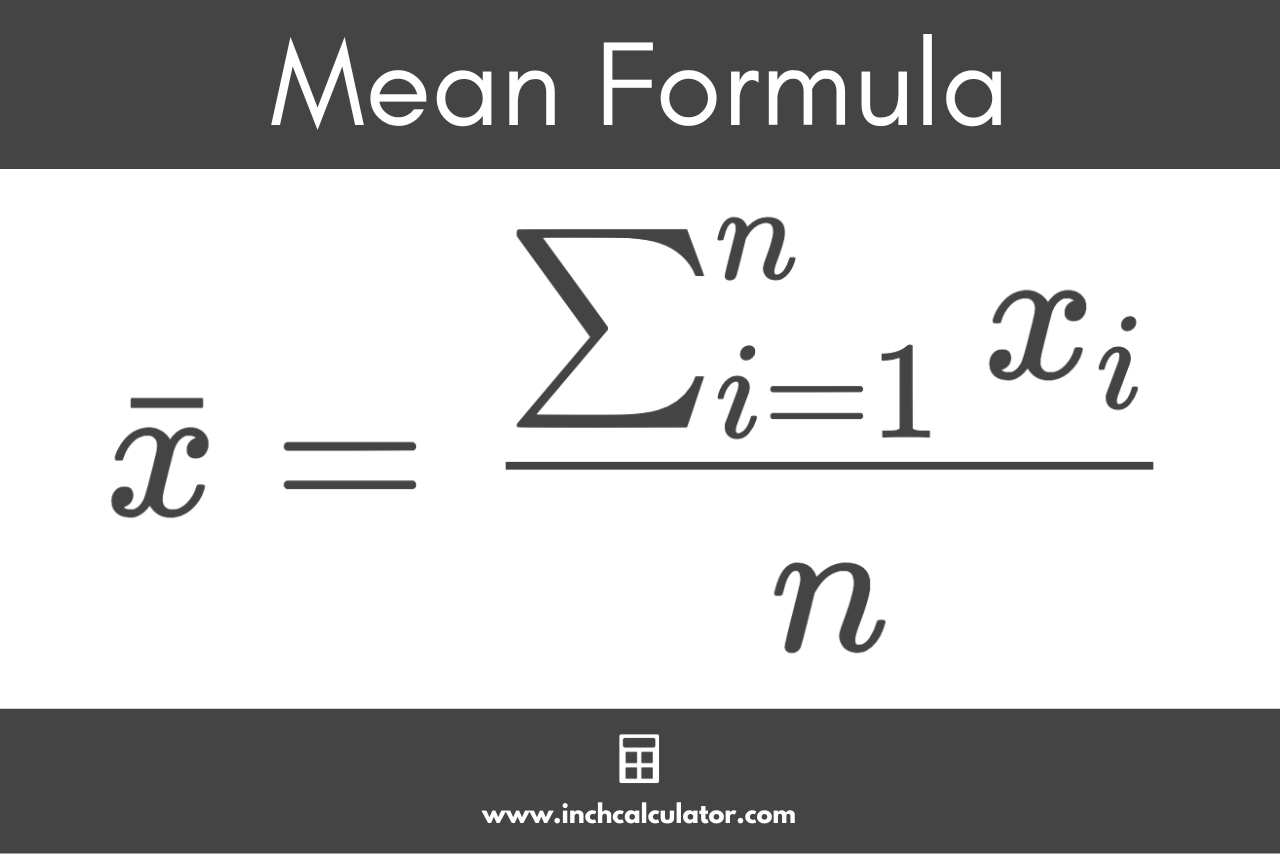 There are three steps for calculating the mean of a dataset.

The mean x̄ of the numbers above is 8.5.

This is the process for finding the arithmetic mean, but there are several other variations of the mean to measure central tendency.

The geometric mean is another measure of the central tendency of a dataset. Instead of measuring the center using addition and division like the formulas above, it uses multiplication and the root.

The geometric mean x̄ can be expressed using the following formula:[2]

This is equivalent to the nth root of the product of the values in the set:

A weighted mean, sometimes called a weighted average, is an average value that reflects a different amount of importance of each value in a data. It is different from the arithmetic mean since each value contributes to the average more or less, depending on its weight.

The weighted mean x̄ can be expressed using the following formula:[3]

This is a simplified representation of the formula:

The harmonic mean is yet another measure of central tendency, and it is the reciprocal of the arithmetic mean of the data.

The harmonic mean can be expressed using the following formula:[4]

The harmonic mean x̄ is equal to the count of values in a set of n numbers, divided by the sum of the reciprocals of each value.

This is equivalent to the following simplified formula:

The median is also a measure of the central tendency of numeric data. The median is the middle value or middle number of the dataset rather than the average value.

The median represents the mid-point of a number set. Half of the numbers in the set are above the median, and half are below it.

So should you use the mean or the median to describe your data? The mean might be beneficial if the average value of the entire set of data is important.

Since the mean considers each value in the data, it might be a more accurate way to describe the central tendency of the data if the majority of the data are in an evenly distributed range.

The average value of this data is 17, while the median value is 3.

Since the median only considers the midpoint of the data, it might do a better job of discarding those outliers and reducing the skew. However, there are some cases where those outlier values are important and need to be considered, so the mean might be a better representation of the data in that case.