Convert a decimal to percent by entering the decimal value in the calculator below.

Steps to Convert a Decimal to Percent

Start with the decimal to percentage formula
p=decimal×100
Substitute value in the equation
p=0.75×100
Solve
p=75%
Learn how we calculated this below
Add this calculator to your site

Do you want to convert a percent to decimal?

How to Convert a Decimal to a Percent

Percent means “per 100” and can be expressed in percent form which has a % symbol after the number, or in decimal form, which does not have the % symbol.

To convert from a decimal number to percent form, simply multiply the decimal by 100 and add the % symbol to the end. See the following formula for converting a decimal to a percentage.

Thus, the percentage p is equal to the decimal d times 100.

For example: let’s convert .367 to a percent using the formula.

An alternative approach is to simply move the decimal point to the right 2 places.

For example: let’s convert .275 to a percent by shifting the decimal place to the right 2 places. 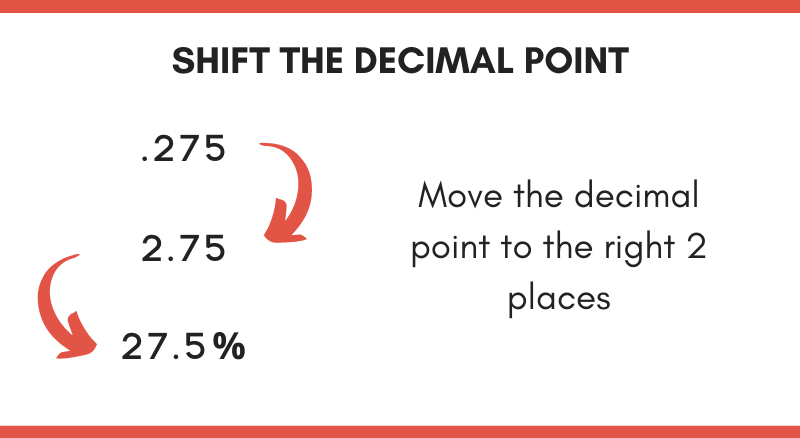 Another way to convert a decimal to percent is to use a conversion table. The table below shows common decimal values and their equivalent percentage values.