Enter your IQ score to calculate which percentile it falls in. 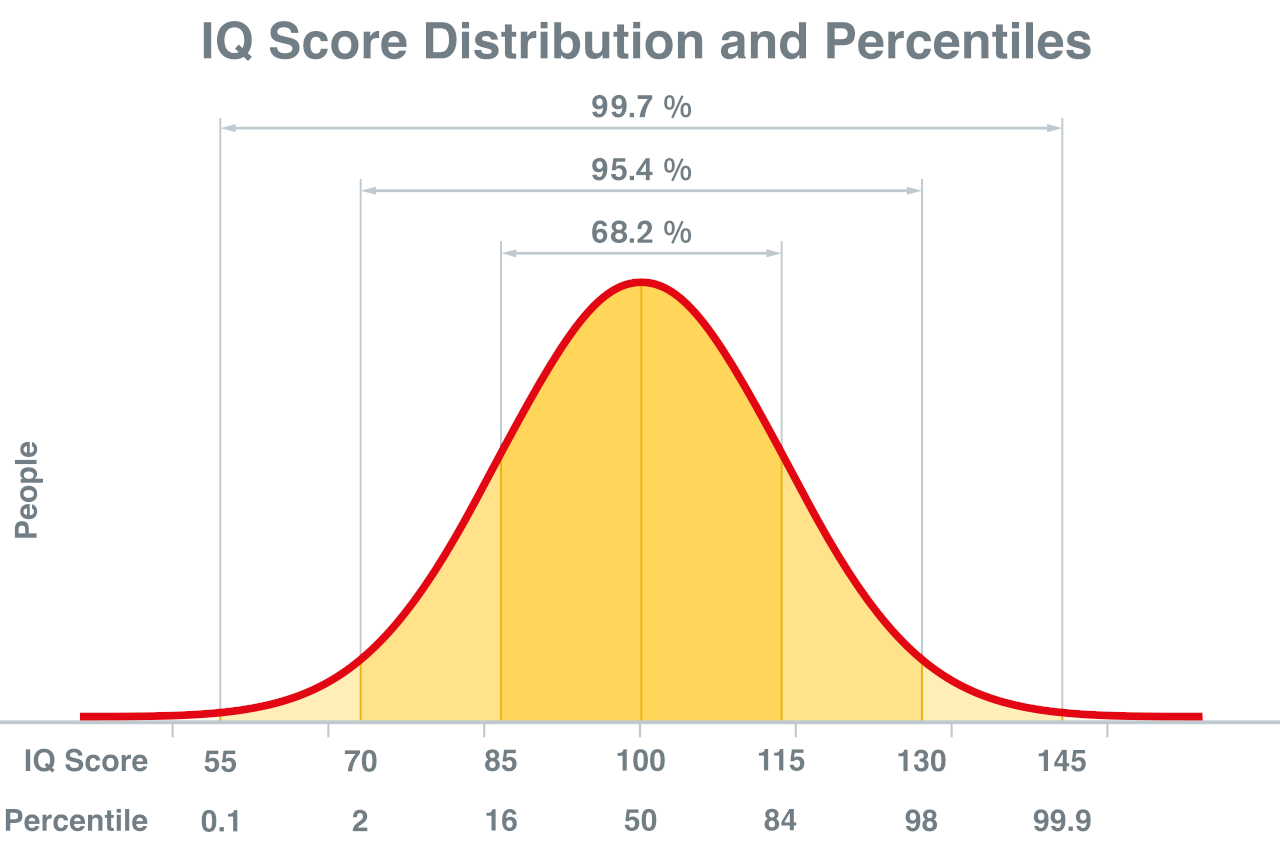 How to Calculate Your IQ Percentile

IQ, short for intelligence quotient, is a number or score representing a person’s reasoning ability. IQ is measured using a set of standardized tests to measure a person’s ability to solve problems.

A person’s IQ score is a number used to measure human intelligence. While the vast majority of people fall in the range of 60 to 140, 68% of people have an IQ in the range of 85 to 115, as shown in the distribution chart above.

What is the IQ Scale?

There are several IQ scales that classify an IQ score with varying levels of cognitive ability, but the two most widely used today are the Stanford-Binet and Wechsler Intelligence Scales.[1]

The IQ scale below shows the classification of IQ scores using the current Wechsler Adult Intelligence Scale.[3] More value-neutral terminology is also included with the reference.[4]

What is a High IQ?

So, what is a high IQ score then? Well, that’s all relative!

The Stanford-Binet and Wechsler intelligence scales indicate that an IQ over 130 is in the upper bound of IQs, which is in the top 2% of scores.

While there is no theoretical maximum score, an IQ of over 180 is profoundly rare. There are conflicting claims of who has the highest ever recorded IQ score, but Ainan Celeste Cawley certainly is at or near the top of that list with an IQ of 268.[6]

What is an Average IQ?

So, you’re probably itching to know how to find your IQ score by now. The best way to do that is to take a test.

There are several standardized tests available; the most common are:[7]

IQ tests measure a person’s logic, spatial awareness, verbal reasoning, and visual abilities. Since intelligence tests do not measure knowledge on subject-matter, they are not something you can or should study for.

Once you have found your IQ score, you might want to know how you compare to the rest of the population? To do that, you can determine what percentile the score is in.

The percentile is the percentage of people with an equal or lower score.

IQ scores follow a standard bell curve for a normal distribution. The curve is distributed using standard deviations from the mean.

You can use the chart below to see which percentile your score is in, and of course, the calculator above will calculate the most precise percentile.

The chart below shows the range of IQ scores from 10 to 200 and their percentiles.