The inch is a unit used to measure length. Use one of the conversion calculators below to convert to another unit of measure, or read on to learn more about inches.

Choose a unit of length to convert to.

An inch is a unit of linear length measure equal to 1/12 of a foot or 1/36 of a yard. Because the international yard is legally defined to be equal to exactly 0.9144 meters, one inch is equal to 2.54 centimeters.[1]

The inch is a US customary and imperial unit of length. Inches can be abbreviated as in, for example 1 inch can be written as 1 in.

Inches can also be denoted using the ″ symbol, otherwise know as a double-prime. Often a double-quote (") is used instead of a double-prime for convenience. Using the double-prime, 1 in can be written as 1″. 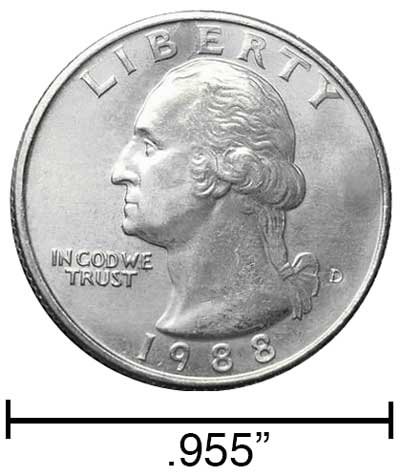 The standard ruler has 12", and are a common measuring tool for measuring inches. They are also often measured using tape measures which commonly come in lengths from 6' - 35'. Other types of measuring devices include scales, calipers, measuring wheels, micrometers, yardsticks, and even lasers.

One of the earliest definitions of the inch declare the length as being equal to three barleycorns. The inch is now the subdivision of 1/12 of a foot.

Inches are a standard unit of length that are most commonly used in the United States, Canada, and the UK.

Why Are There 12 Inches in a Foot?

The Romans used the duodecimal number system, which is a base-12 number system. They preferred to use halves and twelfths for subdivision, and they used a notation system that used a dot, called an uncia, to indicate one-twelfth.

The word uncia later became the source for the word "inch" that we use today. This is the origin of the inch and the reason why there are 12 inches in a foot.

In addition to a preference for the number 12 with the number system of the period, the length of a thumb from the first joint is about an inch. The length of the thumb tip offers a convenient and semi-consistent form of measure, and subdividing the foot into these smaller units makes logistical sense for the time period.

The number 12 also more factors than other numbers such as the number 10, which makes it easier to work with mathematically. This makes it easy to handle fractions like 2/3 and 3/4, which are difficult to handle in a base-10 number system.

You'll probably also be interested in our inch fraction calculator, which converts inch values from decimal to a fraction and solves inch fractions.

Try our other measurement calculators.