An inch is a unit of length commonly used in U.S. customary and imperial measurement systems. One inch is equal to 1/12 of a foot or 2.54 centimeters.

Inches are abbreviated in,[1] but are also often indicated with a double prime symbol ″. Usually a double-quote ” is used instead of a double-prime for convenience.

Portions of an inch are often represented either using decimal or fraction form. Inches are commonly divided into fractions of varying degrees of precision, including halves (1/2), quarters (1/4), eights (1/8), sixteenths (1/16), thirty-seconds (1/32), and sixty-fourths (1/64).[2]

These are known as dyadic fractions. 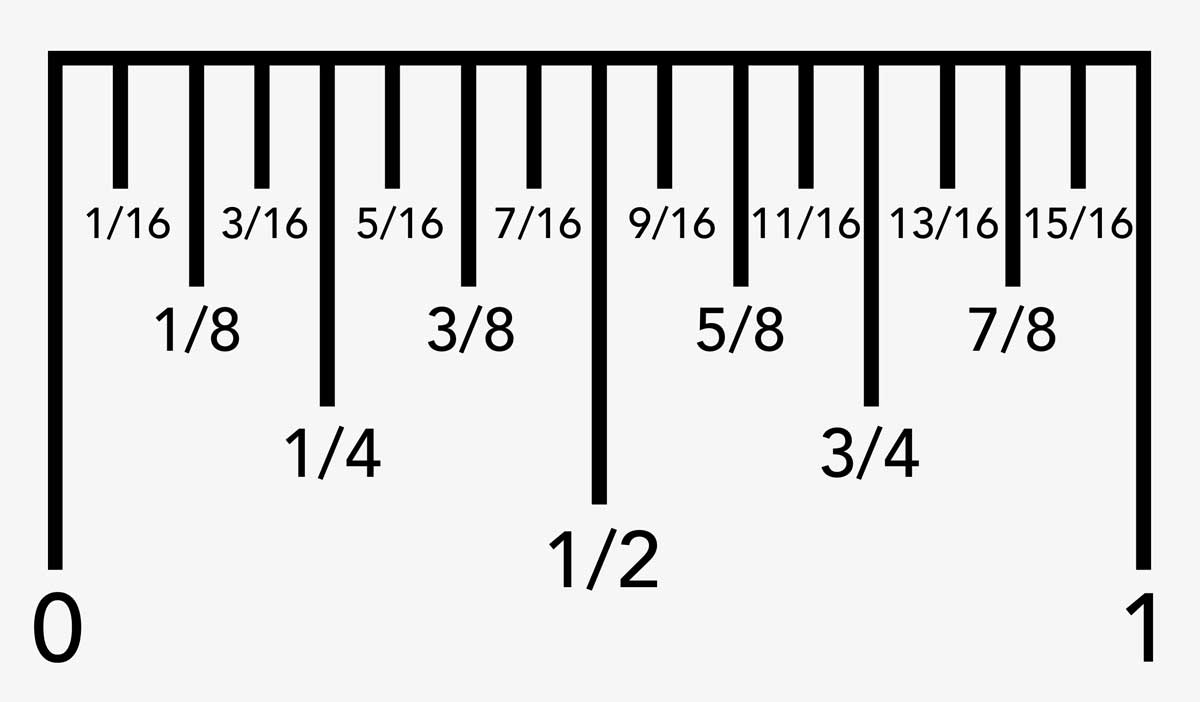 When more precision is needed, they are expressed using decimal form. In fields such as machining, inches are commonly expressed in thousandths (thou) or ten-thousandths (tenths).

Inches are often measured using a ruler, yardstick, architects or carpenter’s rule, or a tape measure.

The current length of an inch was defined in the July 1, 1959 yard and pound agreement, which redefined the inch in relation to metric units. The agreement defined one yard as being exactly equal to 0.9144 meters, which allows us to derive the length of an inch as being equal to 2.54 centimeters.[3]

Use our inch conversion calculators to convert to even more length measurements.

Adoption Throughout the World

The inch is primarily used in the United States, as the rest of the world has mostly adopted the International System of Units, which is the modern version of the metric system.

In the U.S., an inch is commonly used for shorter measurements in many fields, including math, construction, and engineering, though many scientific fields have transitioned to using SI length units. Tenths, hundredths, and thousandths are used for very small measurements, often in fields such as machining.

Although Canada has adopted the metric system, Inches are also used mostly due to the close proximity and trade with the U.S. Many product imports and exports are denoted in inches, requiring limited use of the U.S. customary system.

The United Kingdom also still has limited use of the inch measurement, mostly in the public sector for signage.[4]

Origin & History of the Inch

One of the earliest definitions of the inch declares the length as being equal to three barleycorns. An inch is now the subdivision of 1/12 of a foot.

Even so, the actual length of the inch has varied with the variance in the true length of the foot. It wasn’t until the 1959 yard and pound agreement when the world agreed to the exact length of the national yard being equal to 0.9144 meters, that the definition of the inch was equal to 2.54 centimeters.

Before the 1959 agreement, there were actually multiple definitions of the inch, and the exact length varied throughout the world.

The difference in definitions was subtle, as they were only off by 0.00013 of an inch. While the definitions were close, the slight variances caused issues as the precision requirements increased during the early 20th century.[5]

The annoyances with managing multiple varying definitions of various length and weight measurements throughout the world led to the need for an agreement on an international standard.

Why Are There 12 Inches in a Foot?

The Romans used the duodecimal number system, which is a base-12 number system. They preferred to use halves and twelfths for subdivisions, and they used a notation system that used a dot, called an uncia, to indicate one-twelfth.

The word uncia later became the source for the word inch that we use today. This is the origin of the inch and the reason why there are 12 in a foot.

In addition to a preference for the number 12 with the number system of the period, the length of a thumb from the first joint is about an inch. The length of the thumb tip offers a convenient and semi-consistent form of measure, and subdividing the foot into these smaller units makes logistical sense for the time period.

The number 12 also more factors than other numbers such as the number 10, which makes it easier to work with mathematically. This makes it easy to handle fractions like 2/3 and 3/4, which are difficult to handle in a base-10 number system.

There are several variations of the inch with mixed usage today.

As you might have guessed, using two slightly different definitions of the inch in the U.S. continues to introduce confusion and the opportunity for error. Thankfully several government organizations have collaborated on deprecating the survey foot, and thus the survey inch, with the goal of completely phasing it out by 2022.[7]

Scotland used their own bespoke definitions for length measurement until they were officially replaced by English units in the 17th century. The Scottish units continued to be used unofficially for several centuries.

As noted earlier, the modern inch is based on the Roman length system. The Roman uncia, or inch, is equal to 1/12 pes, or Roman foot.

The French inch, also known as the pouce or Paris inch, is based on the French system of measurement. The pouce is subdivided into 12 ligne.

A metric inch is 1/12 of a metric foot, which is occasionally used in the United Kingdom. Although the metric foot is not officially defined in an official standard, it is sometimes used in the lumber and construction industries.

When measuring an area, the square inch is used. Abbreviated sq in, it’s equal to an area that is 1″ by 1″.

When measuring a volume, the cubic inch is used. Abbreviated cu in, it’s equal to a volume that is 1″ by 1″ by 1″.